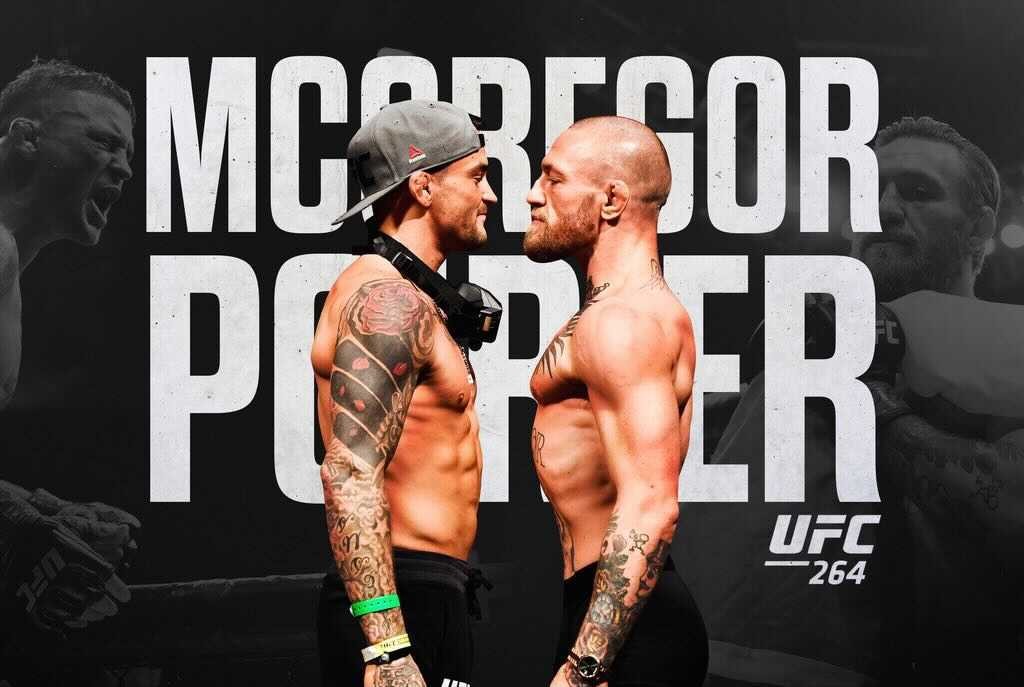 Dustin Poirier and Conor McGregor have dispatched with the pleasantries that highlighted the build to their second career meeting earlier this year on Fight Island.

There is no talk of donations to Poirier’s Good Fight Foundation and no pictures of the combatants, arms around each other’s shoulders, smiling brightly just days ahead of stepping into the Octagon being taken this time around.

Saturday night’s UFC 264 main event was inevitable from the second Poirier put McGregor on the canvas midway through the second round of their clash at UFC 257 in January. The result leveled the series at one win apiece, which Poirier acknowledged immediately, planting the seeds for a trilogy bout that initially didn’t seem all that necessary; at least not with such immediacy.

That victory affirmed Poirier’s standing as the top lightweight in the UFC, and with the title vacated, an obvious choice to make up one half of the tandem that would battle to crown a new divisional king.

The 32-year-old veteran from Lafayette, La, quickly identified the rubber match with McGregor as the more lucrative and appealing option of the two, picking the bag over the belt, knowing that if he replicated his recent efforts in a third match against the Irish superstar, the opportunity for fight for UFC gold would still be there for him.

McGregor initially handled the loss to Poirier in January with aplomb, praising his rival’s use of low calf kicks to attack his lead leg and admitting that jumping back into the cage with a truly world-class competitor having spent 40 seconds inside the Octagon over the previous 27 months was a deficit too great to overcome. If you want to hang with the best, you have to prepare like the best, and one training camp after nearly a year on the sidelines didn’t cut it.

The Irishman vowed to return and the trilogy fight was eventually booked, and somewhere between signing the contracts and stepping into the Octagon at T-Mobile Arena in Las Vegas, McGregor slipped back into his brash, trash-talking ways, taking aim at Poirier from all directions, ratcheting up the intrigue surrounding this weekend’s main event with each passing day.

He challenged Poirier’s approach in the second meeting, urging him to keep Saturday’s fight standing, but “The Diamond” refused to take the bait, countering as effectively on Twitter as he did inside the Octagon during their second meeting, accurately pointing out that he was effectively mixing his martial arts in January while suggesting McGregor’s insults came from a place of insecurity.

McGregor posted a creepy voice recording directed to Poirier, digging into the crates from the build to their first meeting more than six years ago at UFC 174 by addressing him as “Peahead,” declaring, “I’m coming for you.”

He posted an image of Poirier’s wife, Jolie, reaching out via direct message on Instagram with no context or caption, leaving the online Twitter community to think what they may and revel in the continued trolling of the brash Irish megastar so many of them idolize and hold out as some kind of deity.

Poirier never took the bait, opting instead to remain focused on the task before him, cognizant of the fact that a second consecutive victory over McGregor not only renders everything “The Notorious” one has said in the build moot, but also elevates him to a new level of status within the sporting world, while simultaneously bringing him one to step closer to his goal of claiming the UFC lightweight title.

So how will it play out? That’s hard to say.

A second fight in six months is a good starting point for McGregor to reverse the results of the last encounter, and he showed he’s capable of making the necessary adjustments when he followed a similar timeline in his two bouts with Nathan Diaz in 2016, rebounding from a surprise submission loss in the first encounter to edge out the cult superstar from Stockton, Ca, on the scorecards five months later.

But Poirier made excellent adjustments mid-fight in January, settling in quickly and finding ways to chip away at McGregor’s defenses before finishing him with relative ease halfway through the second stanza.

And in the grander scheme of things, “The Diamond” has been locked in for going on five years, amassing a 7-1 record with one No Contest result over his last nine fights, defeating three former UFC lightweight champions, a former interim champion, and then featherweight titleholder Max Holloway, while losing only to Khabib Nurmagomedov, the former champion who retired in October with a 29-0 record.

This is a massive fight for both and each has approached it over the last few weeks in ways reminiscent of nights they’ve been their best — McGregor reverting to the mental warfare and boisterous verbal attacks that helped propel him to superstar status during his run to becoming the first two-weight world champion in UFC history; Poirier remaining the unbothered, externally motivated family man, philanthropist, and entrepreneur who lists “fighter” as his profession and just so happens to excel at his job.

Who will emerge victorious? The wait to find out is almost over.

Before The Main Event Gets Underway…

Saturday’s co-main event will help clarify things in the congested welterweight division, as Gilbert Burns and Stephen “Wonderboy” Thompson lock horns to determine which of them remains in the thick of the title chase and which of them will be forced to take a slight step back.

Burns is looking to get right back into the mix after coming up short in his bid to claim the title in February, where he started well and wobbled champion Kamaru Usman early, only for the dominant champion to steady himself and rally back quickly, ending things 34 seconds into the third frame. Thompson enters on a two-fight winning streak and as the lone man amongst the top four contenders that has yet to share the Octagon with Usman, sending the 38-year-old into Saturday’s penultimate clash believing that a strong showing against Burns is all he needs to secure another championship opportunity.

The Return of “The Suga Show”

Burgeoning bantamweight superstar “Suga” Sean O’Malley returns to action in the opening bout of the pay-per-view main card, squaring off with short-notice newcomer Kris Moutinho in a high-risk, low-reward assignment.

The 26-year-old Contender Series graduate returned to the win column in March, and remains one of the most one of the most upside talents in the sport. While this pairing won’t necessarily advance him up the divisional ladder, it is another chance for the Technicolor standout to potentially collect another Performance of the Night bonus and add to his growing highlight reel.

The UFC 264 lineup is loaded with talent that whittling the preliminary card pairings to one fighter to pay close attention to was more difficult than expected, but at the end of the day, 24-year-old featherweight hopeful Ilia Topuria is the most compelling of the bunch.

Topuria only joined the UFC roster last fall, filling in on short notice opposite surging rookie Youssef Zalal on an early October fight card from Fight Island. That night, he halted Zalal’s three-fight UFC winning streak, and under two months later, he knocked out veteran Damon Jackson less than three minutes into the opening round, running his record to 10-0 overall.

Topuria faces off with grappling ace and former Ultimate Fighter winner Ryan Hall, an awkward and dangerous opponent who has struggled to stay healthy and secure meaningful matchups over the course of his five-plus-year UFC run. Since winning the lightweight tournament on Season 22 of the long-running reality TV competition, the 36-year-old Hall has competed just three times, winning every time out to extend his overall winning streak to eight.

Hardcore fans have been salivating about this matchup since it was first announced, and if Topuria can maintain his winning ways by knocking of “The Wizard” this weekend, he’ll establish himself as the next elite prospect in the talent-rich 145-pound weight class.