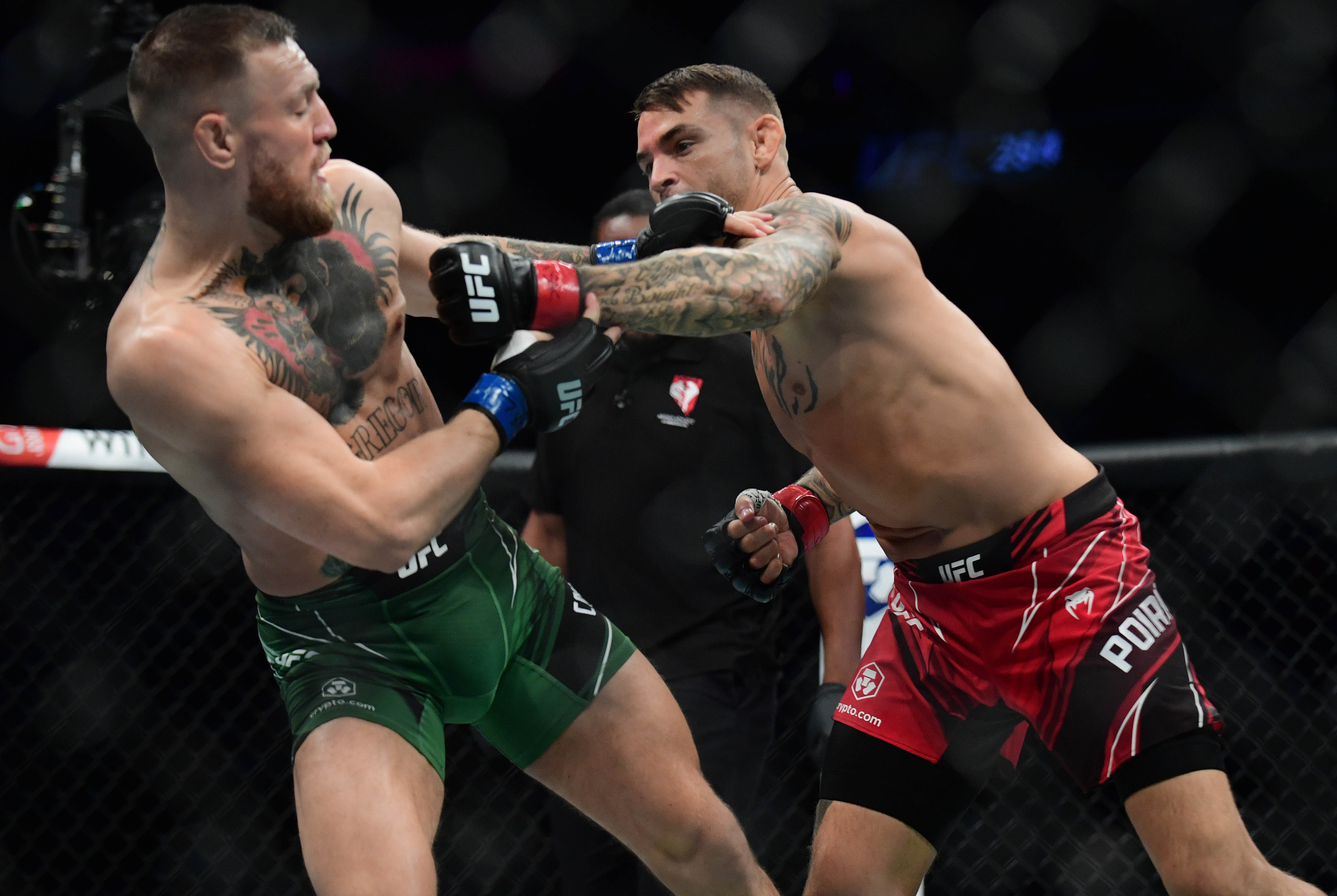 Conor McGregor promised someone was leaving on a stretcher Saturday night at UFC 264, but never in a million years did the Irish superstar believe he’d be the one being carried out. That’s exactly what happened at the conclusion of his epic main event trilogy bout with Dustin Poirier. 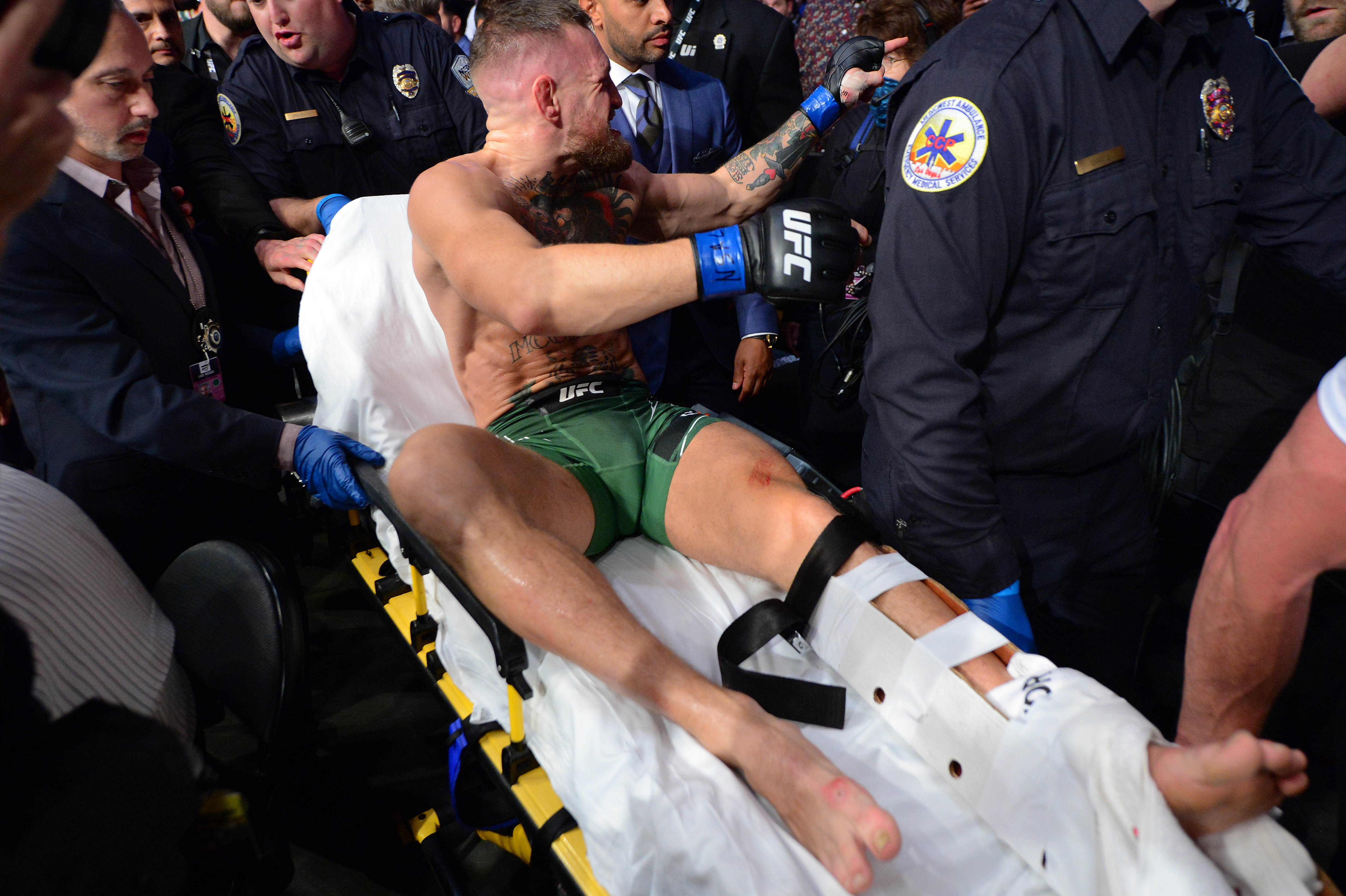 Following a tense stare-down in the center of the Octagon as referee Herb Dean gave the combatants their final instructions, the highly anticipated rubber match started quickly, with McGregor utilizing more movement and attacking with kicks, utilizing a similar approach to his rematch with Nathan Diaz and Poirier’s successful tactics from their meeting in January. When Poirier started to let go with his hands and found success pressing forward, McGregor chased an ill-advised guillotine choke, jumping guard and hunting for the finish, only to end up on his back once Poirier was able to put his head free.

From there, “The Diamond” began unloading heavy shots from top position, and while McGregor looked to counter with elbows off his back, Poirier was clearly getting the better of the exchanges, putting it on his adversary, leaving McGregor bleeding from his ear and his mouth late in the round. When they got back to their feet and into space in the closing seconds of the round, each man fired off a left hand and missed, but as McGregor tried to plant his left foot, his ankle twisted at an unnatural angle and the Irish standout fell to the floor, scooting backward into the fence.

Poirier raced in looking to finish the fight, unloading unanswered blows as McGregor covered up and Dean looked on, the horn sounding to mark the end of the round. As Poirier walked back to his corner, McGregor point to his left leg, his foot positioned at an unnatural angle, bringing the fight to an anticlimactic end.

This was not how anyone envisioned this series ending — with Poirier earning a first-round finish as a result of a doctor’s stoppage and McGregor being carried from the cage, his left leg wrapped in an air cast due to a fractured tibia with surgery already scheduled for Sunday morning — and it seems highly unlikely that this will end up being the last time these two square off.

“No!” Poirier said emphatically when asked if this would be the last time he faced McGregor. “We are going to fight again whether it’s in the Octagon or on the sidewalk. You don’t say the stuff he said.”

“You never want to get a win that way,” the Louisiana native said when asked about the ending. “But what happened was the result of checking a kick — I’m more than sure of it — and he got what was coming to him; karma is a mirror.

“I busted my *** for so long to put myself in this position. I doubled down on myself after beating him in January when they offered me a title shot and it paid off.”

With the trilogy finished and the rivalry paused for the time being, Poirier’s immediate focus is returning home, taking time to decompress and spend time with his family before setting his sights on a title fight with reigning lightweight champion Charles Oliveira.

“He’s not just a guy in the division who happens to have the belt,” countered Saturday’s main event victor, striking back at the idea that getting up for a fight with Oliveira may be a challenge after spending his last two training camps readying for McGregor. “He’s a guy that’s picked himself up off the canvas time and time again — fought through adversity, two weight classes, been in the UFC a decade.

“He’s not just a guy with a belt,” he added. “He’s earned every ounce of gold he has around his waist and I have nothing but respect for guys like that. I don’t know him personally, but his work history, I can’t hate on anything he’s done; it’s incredible.”

Prior to Saturday’s event, both Poirier and McGregor opened as betting favorites in a potential matchup with Oliveira, and following his victory at UFC 264 to solidify his place as the first man to challenge the new Brazilian titleholder, “The Diamond” opened as the -142 favorite, with Oliveira coming back at +120.

No date or location has been presented for that fight.

Elsewhere on the card…