The Toddfather Leads USA Baseball to the Tokyo Olympics

By KEVIN KERNAN | Posted 21 days ago 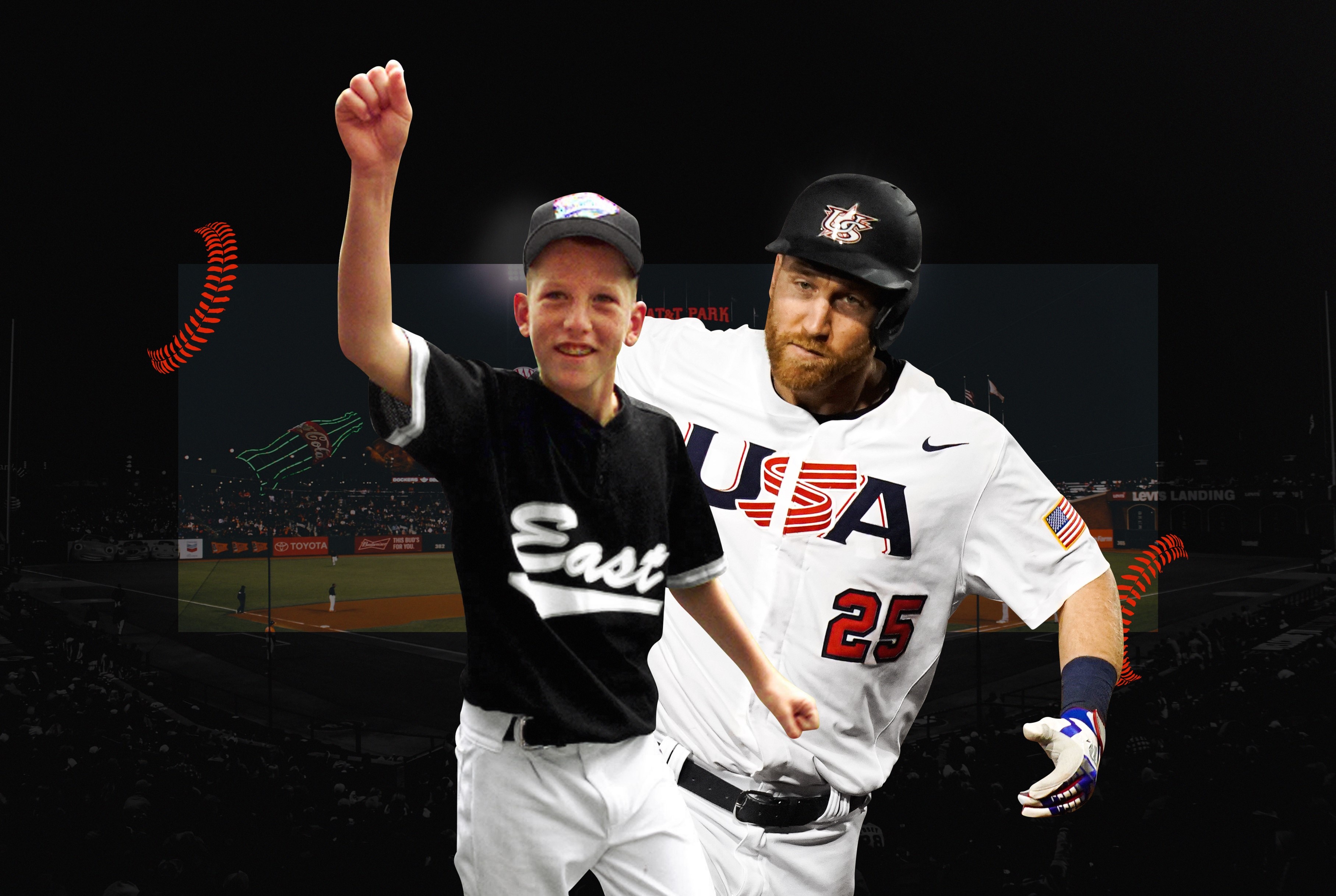 Todd Frazier knows all about competition, international and otherwise. He also knows what it is like to beat a powerhouse Japan team in a championship game.

In 1998, Frazier went 4-for-4 with a leadoff home run and came on in relief to get the final four outs for Toms River East American in a stunning 12-9 win over Japan in the Little League World Series at Howard J. Lamade Stadium before 41,200 fans and a huge ESPN audience.

I was there in Williamsport to watch it all unfold.

A 12-year-old Frazier lived for the competition. Not much has changed the last 23 years as Frazier will head to the Tokyo Olympics this month with Team USA to try to win Gold.

The lessons learned under Frank are still a big part of Todd Frazier’s baseball and life approach.

“On and off the field he taught me how to be a gentleman,’’ Frazier told OSDB of Coach Frank. “He always had some sayings, ‘You never know who is watching,’ which is true. That bodes well in life too. He also said, ‘Listen, go about your business the right way. Be a professional. Shake somebody’s hand with a firm handshake. Turn your hat around when you are talking to somebody. Show some respect for everybody. You never know when you might need them down the road or they might need you.’

It was about much more than a game and still is with Frank and the high school players that have passed through his program the last 43 years.

Frank, 74, does it right. The world could use more coaches like him and in many ways he is speaking for high school coaches all across America when I talked to him about Frazier, baseball, and helping to develop respectful athletes.

Listen and learn, just as Todd Frazier did during his four years at Toms River South as his team became the first Shore Conference team to win consecutive NJSIAA group championships. This is about much more than winning.

“That’s the reason I still coach,’’ Frank told me. “Everybody thinks it is wins and losses. I’m really into coaching the kids to make them role models for the future.

“We talk about life a lot, we relate it to baseball,’’ Frank said.

He then offered this word of warning.

“I don’t see it happening as much as the old days with coaches and I am a little disappointed,’’ Frank said. “It worries me a little bit about the permissive society. These kids are looking for a little discipline. They are proud to be part of something and to make them feel that way, they really love to believe in that and Todd is a good example of that.

“I had Todd working at my baseball camps when he was like 11, 12 years old, and the kids loved him back then,’’ Frank said. “He has that personality that just grows on you.’’

Yes, even at 12, Frazier was The Toddfather.

Frazier, who went on to star at Rutgers playing for another New Jersey coaching legend Fred Hill, certainly has not forgotten where he has come from as Frank pointed out.

“We win a game on Opening Day let’s say, and there is a call from Todd, ‘Hey coach, good win.’ How many pro guys go back to the old days and say, ‘Good win for the program, good win for you coach.’ Todd is a great young man,’’ Frank said. “He’s a great role model for the community here in Toms River, I love the kid. I love his family and I love him.’’

Frank also coached Todd’s older brothers, Charlie, 40, and Jeff, 38, who were both drafted. Charlie, an outfielder, was a sixth-round pick of the Marlins out of Toms River South in 1999 and spent six years in the Marlins system, while Jeff, a third-round pick out of Rutgers in 2004 by Detroit, spent nine years in the minors. The outfielder did make it to the majors with the Tigers in 2010.

Todd Frazier had a commanding performance in the Olympic qualifier, going 4-for-4 with a home run and a double in a key win over Venezuela.

International competition is nothing new for Frazier. He played in the 2010 Pan Am Games with another Jersey kid named Mike Trout and the 2006 Collegiate National Team.

“It’s such a blast to play for your country,’’ Frazier said. “I took it in my hands before the (Venezuela) game started because this was my third time around playing for a USA team, you got to get hyped up for this, there is no other way around it. Playing for your country is the coolest thing in the world and you have to bring it back to the days when you were young, firing everybody up.’’

Team USA, which is managed by Mike Scioscia, will play Israel on July 30. The team will renew workouts in Cary, N.C. July 16 at the USA Baseball National Training Center.

Japan, Dominican Republic, Korea and Mexico round out the field. Team USA is looking for its third Gold Medal in Olympic baseball competition. Said Scioscia of Frazier’s importance: “He’s a guy that has kind of cemented the team. He’s the keystone.’’

Frank knows better than anyone what Frazier brings to the party.

“No. 1 he’s going to be a great team person for that team, a total leader, he doesn’t accept mediocrity,’’ Frank said. “Todd plays the game the right way. He plays it hard from the time I coached him. I have an expression, I always use and it will probably be on my gravestone: ‘You never know who’s watching you.’ I used to tell him there could be a guy out in the outfield watching you Todd.’’

Frank went so far as to set up a mannequin beyond the outfield fence to illustrate his point. Hey, who is that guy? Is that a scout?

“Of all the players that I’ve had over the years, I could tell my players that a scout was coming to watch them and they’d melt,’’ Frank explained. “I tell Todd that, he would turn it up three notches. In batting practice, instead of hitting four out, he would hit nine out. He rose to the occasion. The more pressure on him the more he loved it and that spread to other players. His presence will do that. It will spread a positive influence on everybody.’’

I saw that at 12 years old. A few days before the Little League World Series, I talked my editors into covering Toms River in the Eastern Regional championship game in Bristol, Connecticut, against Delaware, with the winning team heading to Williamsport. I told them this team may be something special.

They were. Frazier led the team onto the field that day in Connecticut singing and woofing, “Who Let The Dogs Out?’’

This was two years before the song was officially released by the Baha Men. Todd’s older brother Charlie had heard it on a Caribbean vacation and purchased the tape.

Frazier hit a home run his first at bat against Delaware and Toms River East American was on its way to Williamsport.

The journey turned out to be Back Page gold with the headline “WHIZ KIDS’’ when Toms River won it all with their incredible victory over Japan, a summer of thrills coming to a head in that final weekend. After that game, Todd proclaimed of the team’s five-home run day, “I knew we had this in us. I knew we could hit this many home runs.’’

After all, they were the Beasts of the East.

Along the way, the kids from Toms River always had fun no and Todd Frazier was leading the charge. A few years later Frazier and his Baja Men tape made it to Toms River South and would be played before big games on the back of the bus.

Now, at the age of 35 and with 11 major league seasons and 218 home runs, Frazier is still enjoying the ride.

“One day I will sit back and reflect and see how much I really did in this game and be very proud of myself,’’ said Frazier, who hopes to get back to the majors after the Olympics.

Frazier is quick to credit his family for making him strong and his wife Jackie for all the work she has done raising their three children as Todd makes the baseball journey. Blake is seven, Grant is two and daughter Kylie is five. “She is my backbone,’’ Todd said of Jackie. “She is my No. 1 to deal with three kids for a lot of years.’’

He is passing along lessons he learned to his children. “It’s a lot of fun being a parent and showing them the rights and wrongs,’’ Todd said.

It was his brothers who helped guide him.

“My brothers always grabbed me by the neck and said, ‘Go back at ‘em, don’t be afraid,’ ’’ Frazier explained. “That’s something I love. I prosper when pressure comes because I’ve already been in those situations as a young kid. When you are a young kid that is when you are your most vulnerable. There are a lot of situations where you are going to be timid, and don’t get me wrong, in the beginning I was, but eventually I took it on and I wasn’t afraid of anything.’’

His brothers are still teaching the game. It was Charlie who pitched to Todd when he won the Home Run Derby in Cincinnati at the 2015 All-Star Game. The brothers run baseball academies. Charlie runs Frazier Baseball and Jeff has Frazier’s Downtown Academy (DTA).

Charlie and Jeff also gave young Todd a head’s up on how to look Coach Frank directly in the eye when you speak to him, shake his hand using a firm grip, and most of all, make sure you hat is on straight.

“He pushed me and knew what buttons to push,’’ Frazier said of Frank. “He got the best out of me.’’

Now comes another baseball chapter. A quick check of the Japan roster and it looks like no one from that 1998 team will be playing for Japan.

“That would be interesting,’’ Frazier said if one of the 12-year-old opponents wound up being an Olympic opponent. “They would need to get some revenge but we aren’t going to let them have it.’’

Time for an encore: Who Let the Dogs Out?