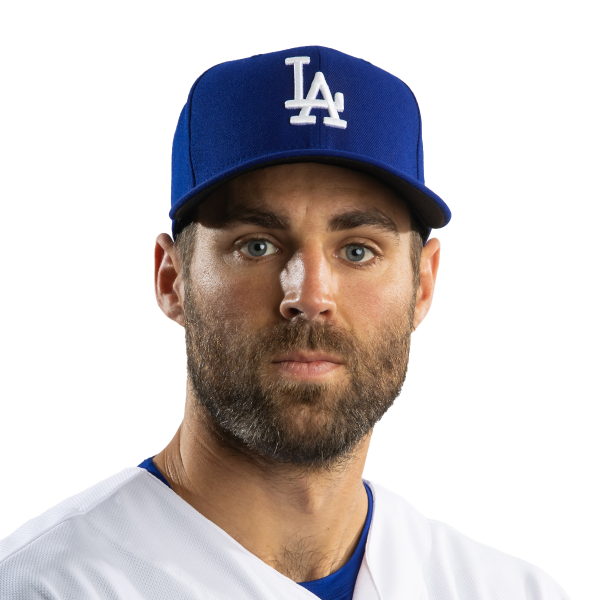 Home Run for Hope, hosted by Chris Taylor of the Los Angeles Dodgers, is a one-night-only evening of music, giveaways, and celebrity auction items that will include intimate performances by Brad Paisley, Jake Owen, and Scotty McCreery, along with some very special surprise guests. All proceeds will benefit Children’s Hospital of The King’s Daughters and Roc Solid Foundation in support of the fight against pediatric cancer

Attended the sixth annual Back to School Bash at The Dream Center, with the Los Angeles Dodgers Foundation (LADF) serving as the presenting sponsor for the event. The day also included the dedication of a new children’s park.

get involved
The Dream Center

Our mission is to connect broken people to a community of support by providing free resources and services that address immediate and long-term needs in the areas of homelessness, hunger, poverty, addiction, abuse, education and human trafficking.

get involved
NEGU (Never Ever Give Up)

We believe every child fighting cancer deserves joy, the opportunity to smile, and be encouraged to NEVER EVER GIVE UP!

The story of Roc Solid Foundation® began more than 30 years ago when founder Eric Newman was diagnosed with liver cancer at age three. To the surprise of his doctors, he beat the odds and has been in remission ever since. But tragically, he also lost two first cousins to pediatric cancer at young ages, leaving him to question “Why me?” Determined to do something with his passion for helping kids with cancer, his first fundraiser benefited the local children’s hospital (Children’s Hospital of the King’s Daughters in Norfolk, Va.) that saved his life.

get involved
Children's Hospital of The King's Daughters

Children's Hospital of The King's Daughters Health System will lead the region in the provision of children's healthcare services, CHKD will: Deliver excellence in quality and service as we continually measure and improve our outcomes; Evolve and enhance services in response to the needs of children and the advancement of science; Educate the next generation of leaders in children's health; Be the healthcare employer of choice; and Collaborate with others to attain our vision.

Taylor attended Great Neck Middle School in Virginia, where he was on the wrestling team, and won a city wrestling championship. When he attended Frank W. Cox High School, he stopped wrestling to focus on baseball. He was named the All-Tidewater regi...

Taylor attended Great Neck Middle School in Virginia, where he was on the wrestling team, and won a ...

Taylor was recruited to play college baseball by the University of Virginia and the College of William and Mary. He chose to attend Virginia, and played college baseball for the Virginia Cavaliers baseball team, competing in the Atlantic Coast Conference. In his freshman year, Taylor played sparingly as Tyler Cannon, an All-ACC shortstop, received most of the playing time. In the summer of 2010, he played for the Newport Gulls of the NECBL. In his sophomore year, Stephen Bruno was named the Cavaliers' starting shortstop at the beginning of the season, and Taylor began the year as the teams' right fielder. Taylor became the starting shortstop when Bruno suffered a hamstring injury, and retained the job after Bruno recovered. In 2011, he hit a two-out single, with men on second and third to score the tying and winning runs in the decisive game of the Charlottesville Super Regional against UC Irvine and send the Cavaliers to the College World Series. Taylor was selected in the fifth round of the 2012 MLB Draft and made his MLB debut with the Seattle Mariners in 2014.

In 2015, Taylor appeared in 37 games with Seattle in two stints, which were on May 4-June 1 and July 2-30. He appeared at shortstop, second base and third base. He hit .300 with 56 runs, 20 doubles, 6 triples, 4 home runs, 32 RBI, 50 walks and 16 stolen bases in 86 games with AAA Tacoma. Taylor ranked 7th in on-base percentage (.391) and 12th in triples (6). He recorded 27 multi-hit games, including 2 season-high 4 hits games. Taylor ended season participating in Mariners instructional camp in Peoria, AZ. In 2016, he combined in 36 games with the Mariners and the Dodgers, hitting .213 with two doubles, two triples, one homer, and seven RBI. He was acquired by the Dodgers from Seattle on June 19 in exchange for RHP Zach Lee after playing in just two games with the Mariners, going 1-for-3 with two strikeouts. Taylor made three stints with the Dodgers, batting .207 and appeared in 10 games at third base, seven games at second base and five games at shortstop. He slugged a grand slam home run in the sixth inning off of Silvino Bracho on July 15 at Arizona for his first career big league homer, and also recorded single-game career-highs in runs (3), RBI (6) and extra-base hits (3), while tying a career-best in hits (3). He split time between the Mariners' Triple-A Tacoma and the Dodgers' Triple-A Oklahoma City, posting a combined .322/.397/.474 slash line with 25 doubles, six triples, three homers, 37 RBI and 17 stolen bases in 78 games, hitting a combined .395 (30-for-76) with runners in scoring position.

In his second season with the Dodgers in 2017, he had a breakout year posting a .288/.354/.496 slash line with 85 runs, 35 doubles, five triples, 21 home runs, 72 RBI, 17 stolen bases and 50 walks in 140 games, which were all career-bests. He led the Dodgers in multiple offensive categories, ranking first in doubles (34), triples (5), and stolen bases (17), and also ranked in the top 25 in the National League in batting average (21st), SLG (20th), OPS (.850, 22nd), doubles (T-12th), triples (T-15th), extra-base hits (T-19th), stolen bases (T-15th) and stolen base percentage (81.0%, 4th). According to Fangraphs.com, he finished 13th in the NL with a 4.7 WAR, which was the third best on the team behind Corey Seager (5.7, 7th NL) and Justin Turner (5.5, 9th NL). His .368 average in close and late situations was the best mark in the NL and ranked third in the Majors. In 74 games as the Dodgers leadoff hitter, Taylor posted a .302/.370/.530 slash line with 51 runs, 17 doubles, three triples, 15 homers, and 42 RBI along with seven stolen bases. He collected three leadoff home runs, which tied for fifth most in the NL. In 70 road games, he hit .336 with 14 homers and 47 RBI, compared to a .237 mark with seven homers and 25 RBI at Dodger Stadium. He appeared in the outfield majority of the season, playing 49 games in center field and 48 games in left field, while also playing 22 games at second base, 14 games at third base and eight games at third base, posting a .989 fielding percentage in the outfield and recorded seven outfield assists. His three grand slam homers tied for the second most in the Majors and tied for most in Dodger franchise history, joining Kal Daniels, Mike Piazza, Adrian Beltre, and Matt Kemp. He became just the second Dodger player since 1900 to hit a triple and a home run in a game that he did not start in, joining Gordon Windhorn, who accomplished the feat against the Phillies on Sept. 12, 1961. He led the game on Sept. 18 at Philadelphia with his first career inside-the-park home run, which was also the club's first inside-the-park home run since 2011 and L.A.'s first leadoff inside-the-park homer since manager Dave Roberts did so against the Cubs on 2003. Taylor appeared in all 15 postseason games for the Dodgers, hitting .254 with 12 runs, four doubles, one triple, three homers, and seven RBI along with a .889 OPS, and was named co-MVP for the 2017 NLCS with teammate Justin Turner. Taylor is just the fourth Dodger player to reach base safely in each of his first seven World Series games, joining Roy Campanella, Steve Garvey, and Steve Yeager. He started the year with Triple-A OKC, where in 10 games he hit .233 with two doubles, two triples, one homer, and five RBI. He was recalled on April 19 and spent the rest of the season with Los Angeles.

He finished the season strong, slashing .345/.433/.586 with 16 runs, five doubles, three homers, and nine RBI in his last 25 games since the beginning of September. That season, he finished September with the fifth best batting average in the National League, while ranking sixth in the league in OPS and ninth in OBP. Taylor spent the majority of the season at shortstop, but also saw time at center field, left field, second base, and third base, posting a .981 fielding percentage as an outfielder, while recording a .972 combined fielding percentage overall. He appeared in 74 games as the leadoff hitter, with his three leadoff homers tied for fifth most in the National League. Taylor also went 5-for-16 as a pinch-hitter, including stroking his second career pinch-hit homer on June 25 vs. CHC. He launched his first career walk-off home run and his second career walk-off hit with a solo shot in the 10th inning on September 18 vs. COL. He appeared in 15 postseason games for the Dodgers, batting .282 with a double, triple, home run and three RBI. 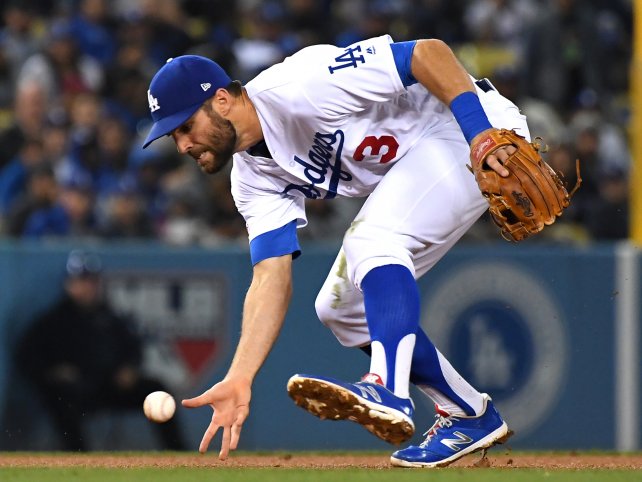 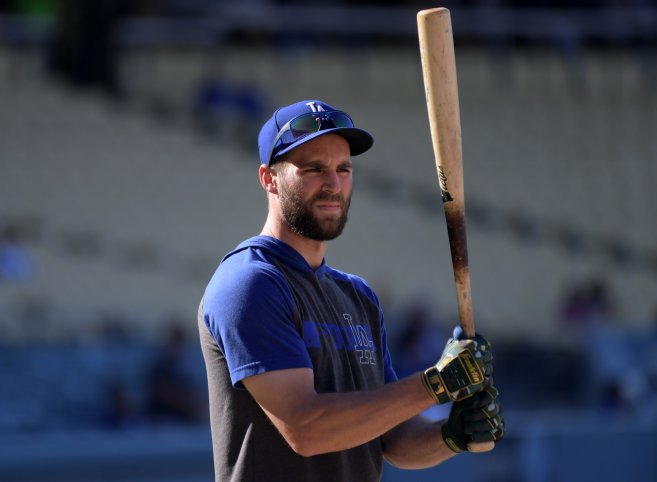 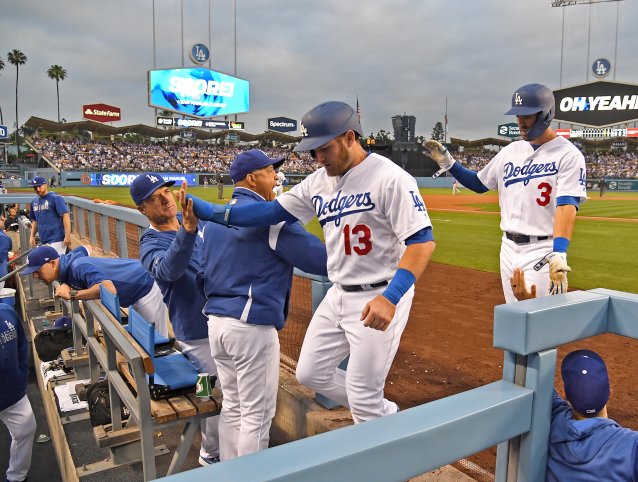 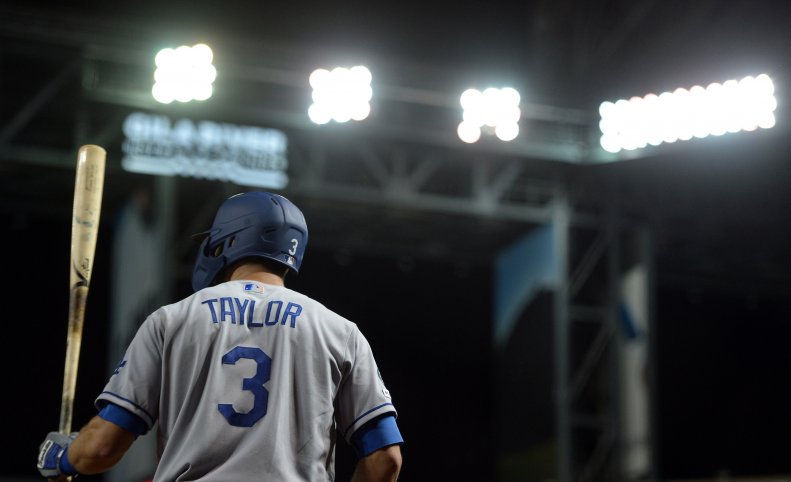 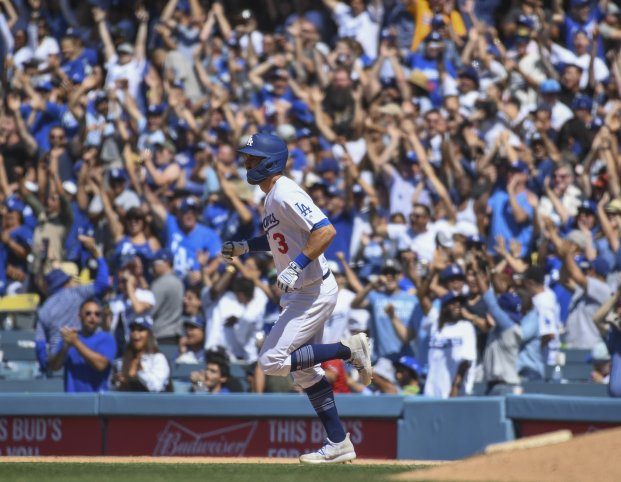 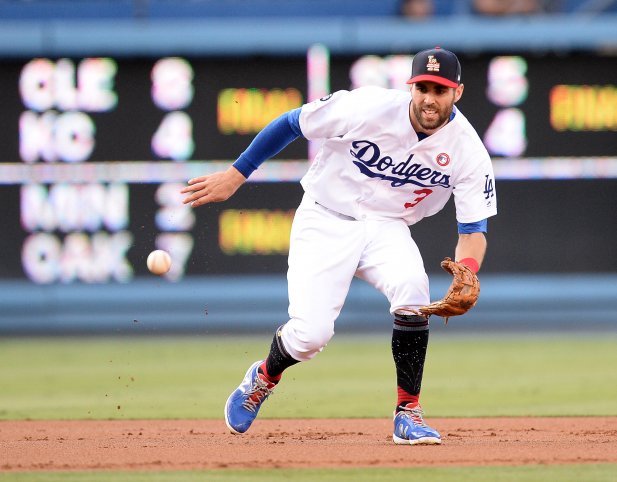 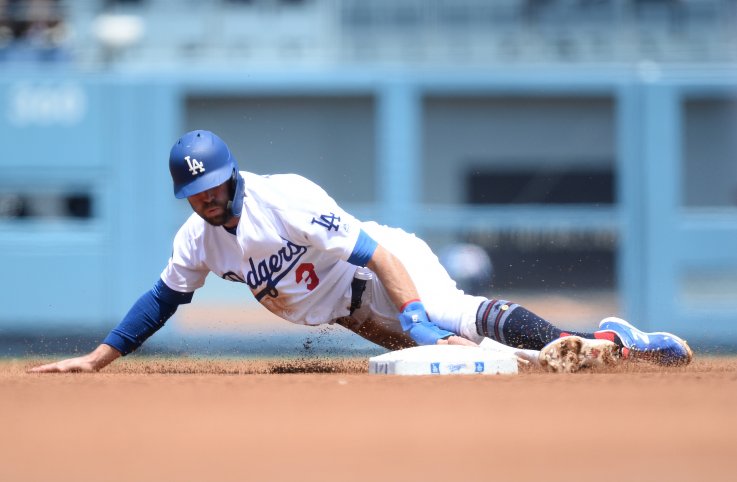 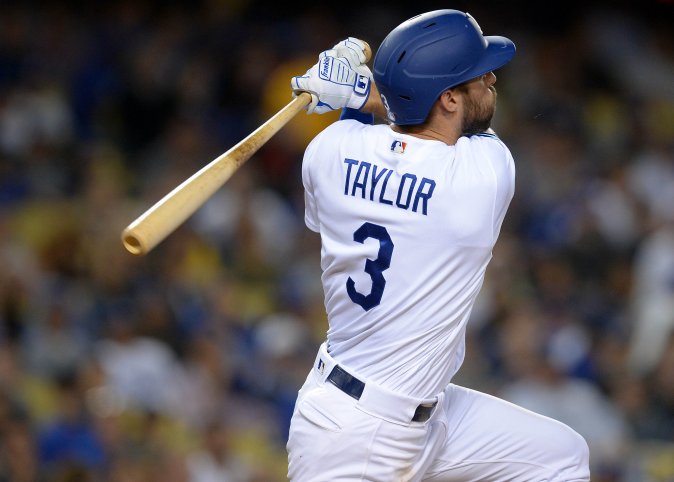 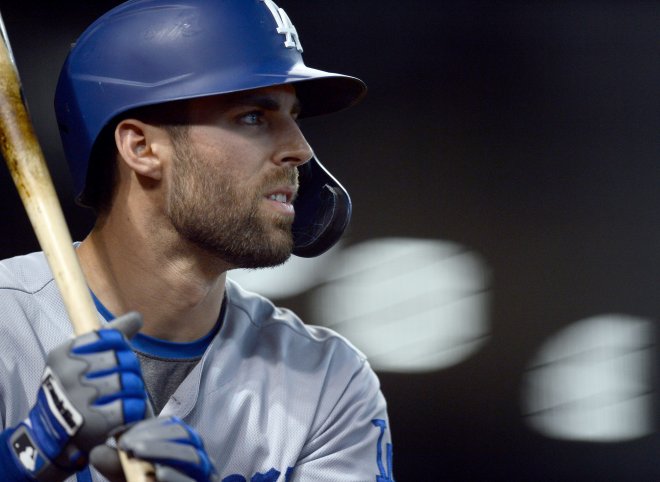 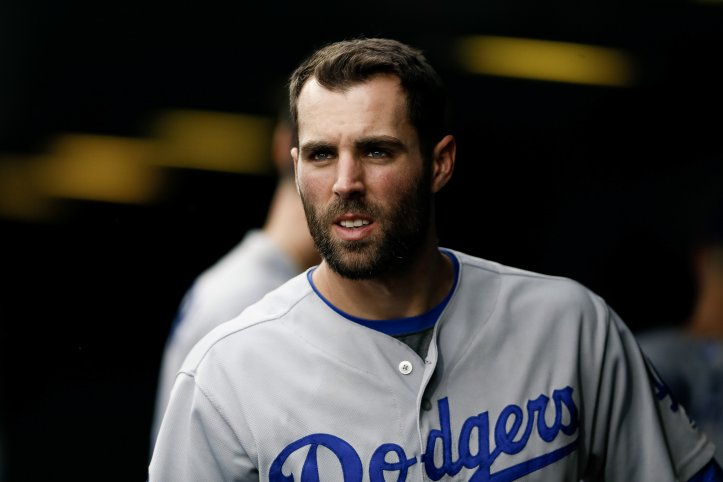 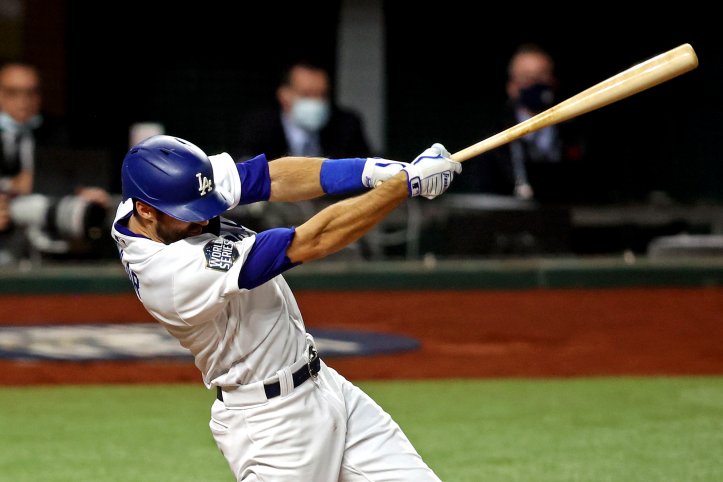 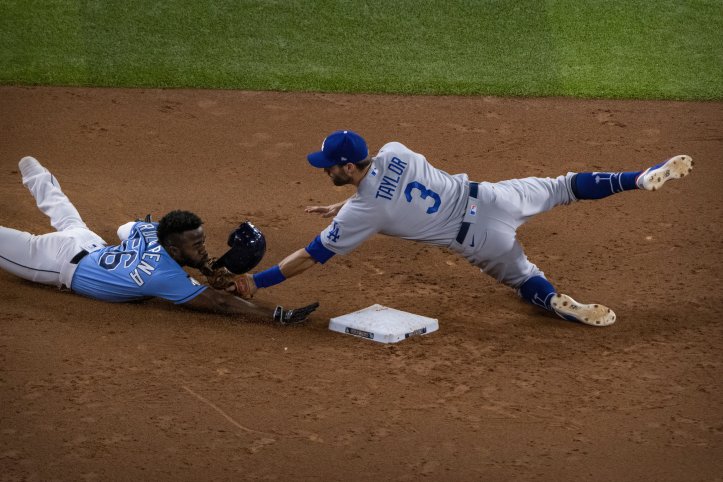 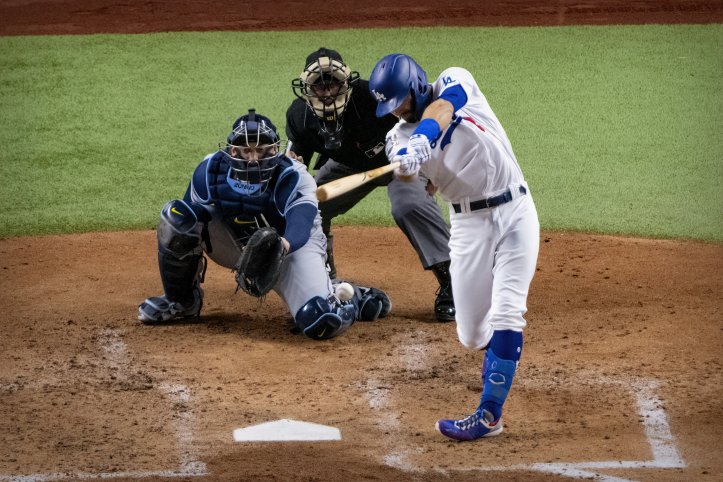 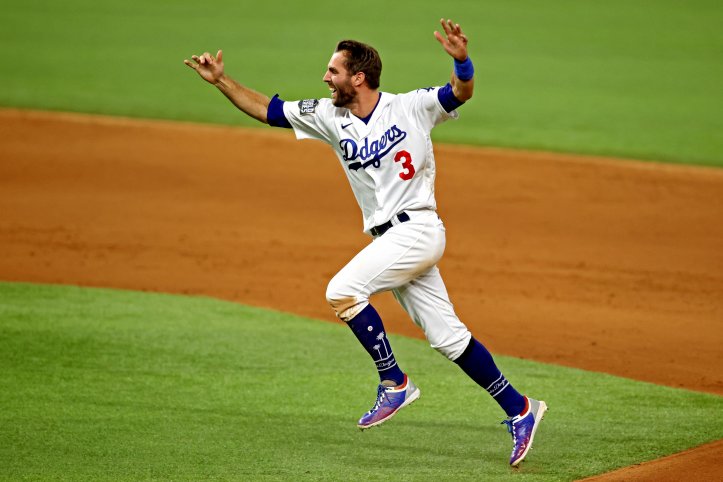 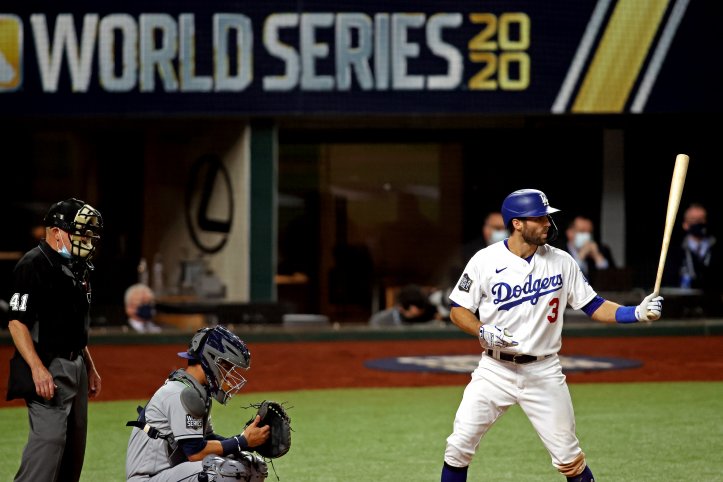