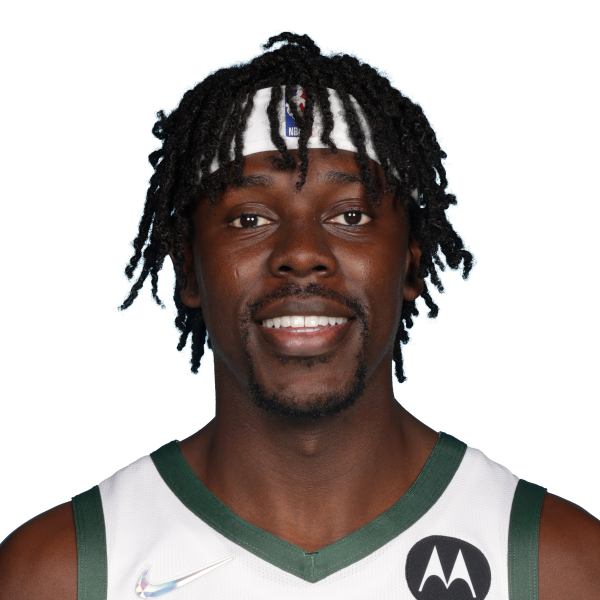 Jrue & Lauren Holiday are committed to intentionally moving communities forward by boldly creating change when and where it’s most needed.

get involved
Involved in 27 charities
Be the Match

Be The Match®, operated by the National Marrow Donor Program® (NMDP), is a nonprofit organization that’s dedicated to helping every patient get the life-saving transplant they need. As trusted leaders in advancing treatments for those facing life-threatening blood cancers, we provide the ground-breaking research, innovative technologies, patient support and education that save lives.

get involved
Full of Grace Foundation

The primary objective and purposes of this organization is rooted in John 1:16 of scripture. "Because of God's abundant grace for us, we feel called to share that grace with others in the community by providing needed resources and support. The organization strives to raise awareness of various needs in the community and provide needed resources to support various organization, individuals and their families from all walks of life.

Carter’s Quality Care's goal is to provide a loving, safe and comfortable home-like atmosphere for each resident who is entrusted to our care. They take pride in providing excellent assisted living services to our residents always. Our trained staff is extremely committed in ensuring their abilities to meet the needs of the resident and their families.

Kid's Kingdom exists to provide quality care and education in a faith-based environment that will enhance the outcome of children’s overall development.

get involved
STEM to the Future

Our mission is to inspire and motivate Black and Latinx youth to be creative critical thinkers who use STEAM to develop solutions to real world problems such as climate change, public safety, and poverty. Youth develop creativity, problem solving, and collaboration skills as they see how a variety of STEAM pathways can be used to create the future they deserve.

At Transitions 2 Success we strive to connect students and their families to resources and services that will enhance and improve their educational experience. Many times students struggle simply because they do no have access or knowledge of programs, community-based services and resources that could benefit them. So whenever we come across information that would benefit our clients and or their families, we love to share it!

get involved
Chloe and Maud Foundation

Our mission is to inspire and unite over four generations of Tap Dancers from around the world, and together, heighten the global respect and appreciation for this rich American Art form: Tap Dance. We welcome all people, regardless of social or economic status, age, gender, artistic or cultural background and create a haven for the creative and artistic process, growth, and achievement. Building the next generation of artists and entrepreneurs.

For 100 years Los Angeles Urban League has served as a powerful advocate for African-Americans and other minorities by ensuring our communities have access to careers with living wages, opportunities to start and grow businesses, and clear pathways to personal and professional growth.

5-Eleven Hoops is a 501 c3 social skills based basketball program for individuals across the Autism Spectrum and all other walks of life.

Lady Hearts is dedicated to the aging community all over the United States by bridging the gap between the generations in a fun and attractive way through volunteer work with a twist and raising money for highlighted senior activity centers and senior assisted living residences. We are sharing light and love to SENIOR HEARTS!

Birthmark Doula Collective is a birth justice organization dedicated to supporting, informing and advocating for pregnant and parenting people and their families in New Orleans.

The Innocence Project exonerates the wrongly convicted through DNA testing and reforms the criminal justice system to prevent future injustices.

get involved
Urban League of Louisiana

The mission of the Urban League of Louisiana is to assist African Americans and other communities seeking equity to secure economic self-reliance, parity and civil rights.  We implement our mission through programs in the areas of EDUCATION and YOUTH DEVELOPMENT, WORKFORCE and ECONOMIC DEVELOPMENT, PUBLIC POLICY and ADVOCACY initiatives.

get involved
Daughters Beyond Incarceration

DBI vision is for every daughter with an incarcerated parent to live a healthy stable life and have a strong, positive, relationship with her parent during and after incarceration. Daughters Beyond Incarceration (DBI) is led by two women with first-hand experience of growing up with an incarcerated father. DBI is dedicated to breaking the cycle of poverty and crime by advocating for girls with incarcerated dads and building strong parent-to-child relationships through public education, leadership development and implementing policy change.

At the Dryades YMCA, our mission is to help people develop character, competence and commitment. Since 1905, we have been persistent and unwavering in our commitment to service through continuous efforts to educate, nurture, cultivate and support the people of this city and region.

The mission of McDonogh 35 Senior High School is to encourage academic excellence for all students in challenging and interactive programs that are supported by teachers, staff, parents, and community.

Welcome to the website of the Central Louisiana Orchid Society in Alexandria, LA. The CLOS was formed in 1980 to promote fellowship among orchid enthusiasts and to educate others in our area on ways to conserve, cultivate, and hybridize orchids.

get involved
Son of a Saint

Growing up without a father is a challenge facing thousands of boys in New Orleans. For too many of them, the challenge will prove overwhelming. Son of a Saint exists for these boys, providing mentorship, education, recreation, camaraderie, cultural enrichment, emotional support and helping to fill the void for dozens of fatherless young men in New Orleans.

STEM NOLA is a national leader in the design and delivery of STEM-based activities, programs and events to K-12 students, families and communities. Participants in STEM NOLA programs receive a unique interactive, hands-on learning experience that allows learners of all ages to deepen their knowledge in STEM studies, gain confidence in their abilities and chart a course for career opportunities in STEM fields.

Hoosier Families Inc. offers an array of Community-Based services that focuses on the preservation and reunification of the families we serve.

We are a not-for-profit, community development corporation, that serves the Haughville, Hawthorne, Stringtown & We Care neighborhoods on the Near Westside of Indianapolis Indiana. WCDC has helped hundreds of families over the last 20 years, and developed assets that will serve the west side of Indianapolis for years to come.

Donated his bubble salary of 5.3M to a variety of charities around the country.

He played college basketball for one season with the UCLA Bruins before being selected by the Philadelphia 76ers in the first round of the 2009 NBA draft with the 17th overall pick. Holiday played four seasons with Philadelphia, where he was named an NBA All-Star in his f...

He played college basketball for one season with the UCLA Bruins before being selected by the Philadelphia 76ers in the fi...

He played college basketball for one season with the UCLA Bruins before being selected by the Philadelphia 76ers in the first round of the 2009 NBA draft with the 17th overall pick. Holiday played four seasons with Philadelphia, where he was named an NBA All-Star in his fourth season, before being traded to the Pelicans in 2013. He is a two-time NBA All-Defensive Team member.

Holiday was born to Shawn and Toya (née DeCree) Holiday. His parents both played college basketball at Arizona State, where Toya was named Pac-10 Player of the Year in 1982. In high school, He was named the 2008 Gatorade National Player of the Year and a Parade Magazine First Team All-American. He also played in the McDonald's All-American Game, tallying 14 points, 5 rebounds, 3 assists and 5 steals. In 2008–09, Holiday played alongside fellow future NBA player Darren Collison in the backcourt at UCLA. In 35 games (all starts), Holiday averaged 8.5 points, 3.8 rebounds, 3.7 assists and 1.6 steals in 27.1 minutes per game. After the season, he declared for the NBA draft, forgoing his final three years of college eligibility.

Holiday was drafted 17th overall by the Philadelphia 76ers in the 2009 NBA draft. With his first All-Star selection, the 22-year-old Holiday became the youngest player in franchise history to be named an All-Star. On July 12, 2013, Holiday was traded to the New Orleans Pelicans in exchange for Nerlens Noel and the Pelicans' 2014 first-round draft pick. On November 24, 2020, Holiday was traded to the Milwaukee Bucks in a four-team trade, involving the Denver Nuggets and Oklahoma City Thunder

Holiday's older brother Justin, also became an NBA player while his younger brother, Aaron also played at UCLA and was selected in the first round of the 2018 draft. His younger sister, Lauren, played college basketball on the UCLA Womens team.

In July 2013, Holiday married US Womens National Soccer team midfielder Lauren Cheney. The two first met at a UCLA women's basketball game during his only season at the school.

Holiday is known for being an all-around good guy. During the shortened 2020 NBA season, Jrue donated the remainder of his salary to small black own businesses and those who were effected most by the pandemic. 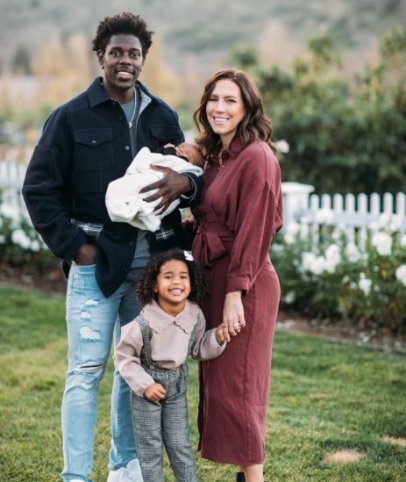 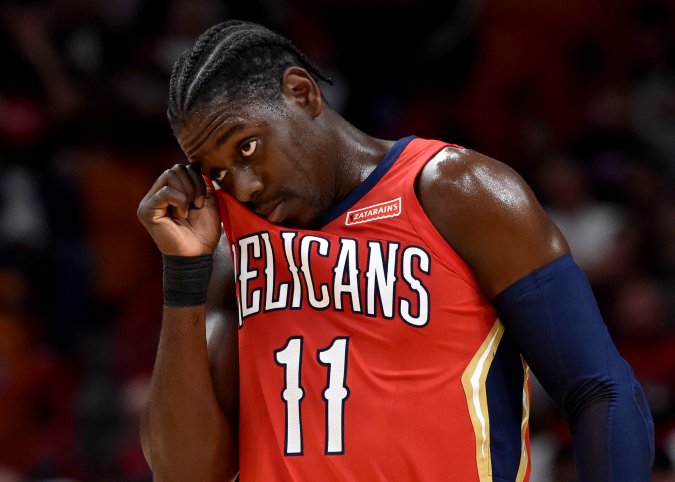 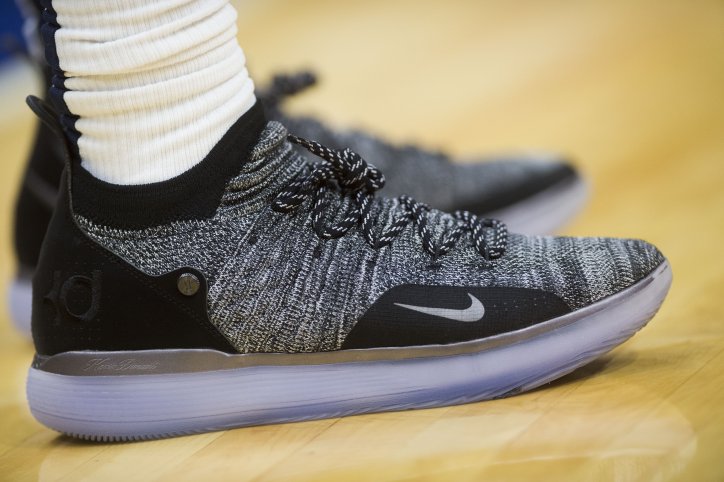 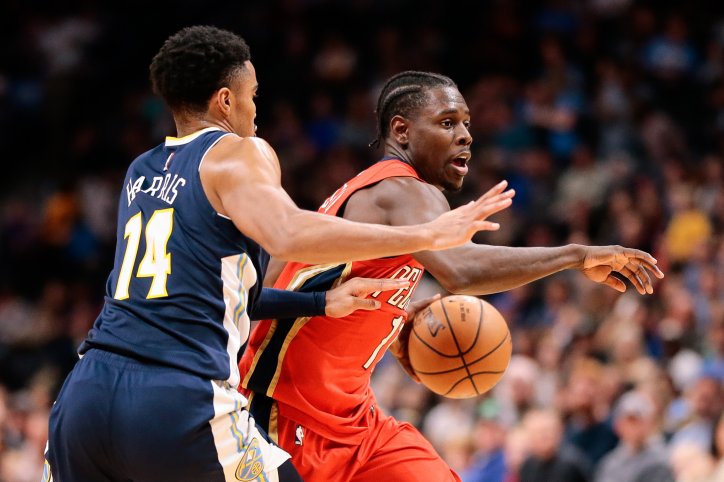 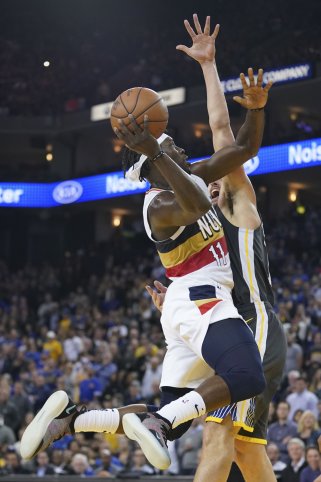 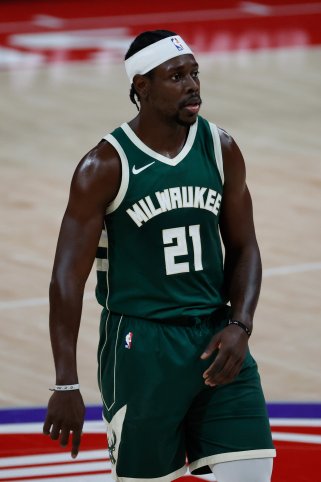 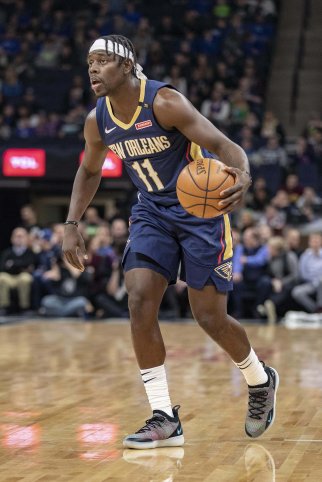 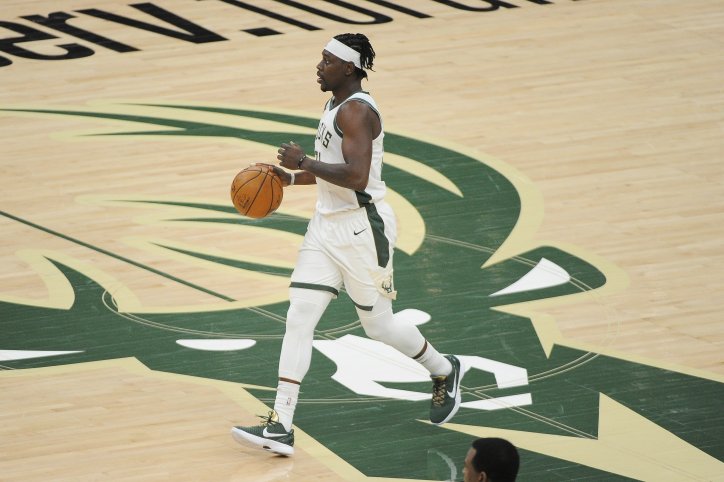 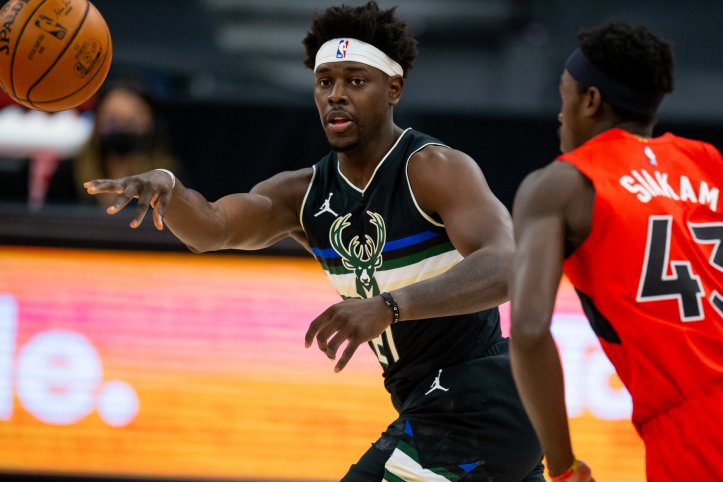 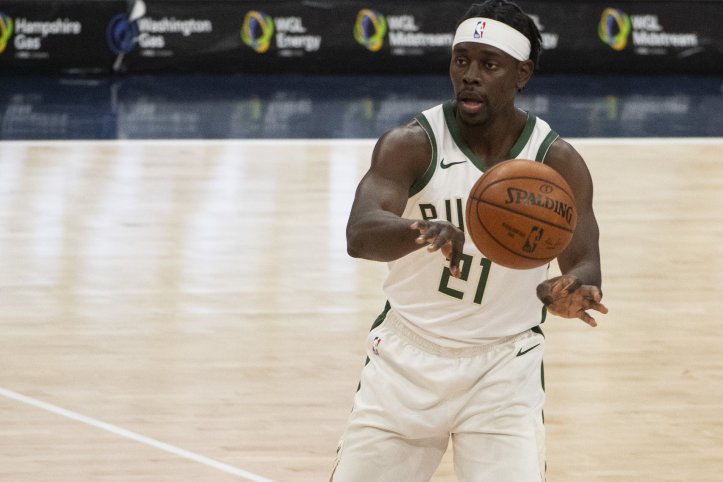 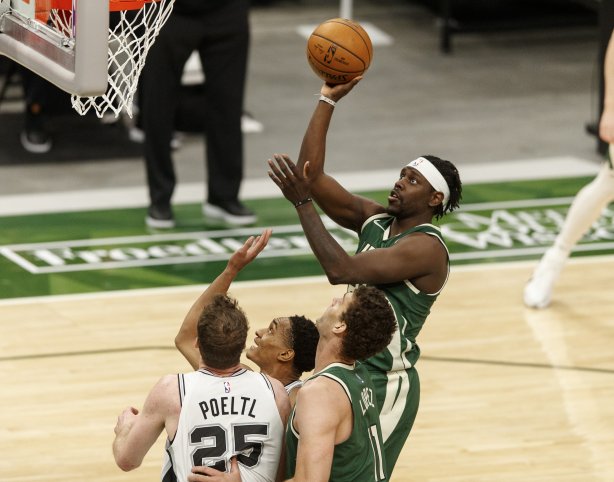 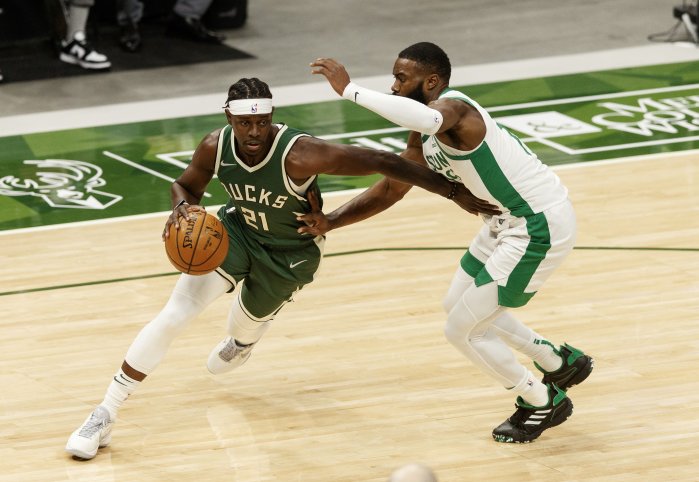