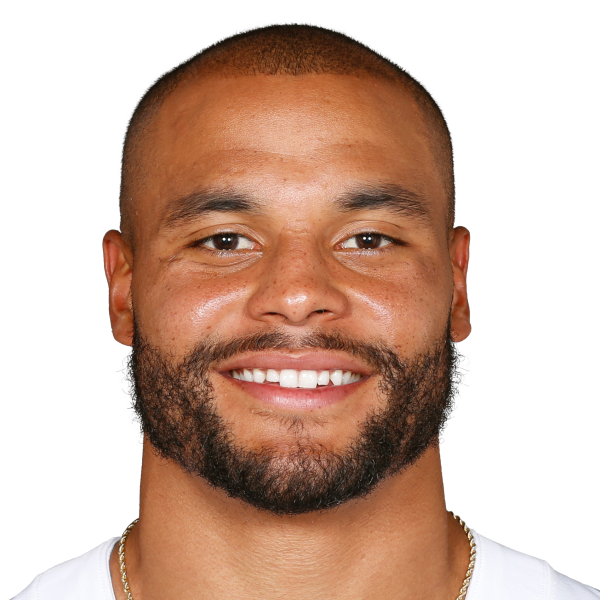 The Ready. Raise. Rise. challenge is a call to action to all Americans to raise money for cancer advocacy groups and spread the word about immuno-oncology research. When people visit ReadyRaiseRise.com, they can take socially-driven actions, like raising and sharing a virtual flag on behalf of a loved one touched by cancer, sending a message of support, and spreading the word about immuno-oncology research.

The Hayden Hurst Family Foundation’s mission is to help youth, military, and others in need regarding their health, education, and wellness by funding services and programs through donations and fundraising events.

Dak Prescott was born July 29, 1993, in Sulphur, Louisiana. He is a quarterback in the NFL. Prescott was redshirted as a true freshman with Mississippi State in 2011. As a backup to Tyler Russell in 2012, he played in 12 games, completing 18 of 29 passes for 194 yards with four touchdowns and no interceptions. He also scored four rushing touchdowns, with 110 yards on 32 carries.

Dak Prescott was born July 29, 1993, in Sulphur, Louisiana. He is a quarterback in the NFL. Prescott was redshirted as a true freshman with Mississippi State in 2011. As a backup to Tyler Russell in 2012, he played in 12 games, completing 18 of 29 passes for 194 yards with four touchdowns and no interceptions. He also scored four rushing touchdowns, with 110 yards on 32 carries.

Prescott began as the backup to Russell again in the 2013 season but took over as the starter when Russell suffered a concussion. He played in 11 games, completing 156 of 267 passes for 1,940 yards with 10 touchdowns and seven interceptions. He also ran for 829 yards on 134 carries with 13 touchdowns. He was the MVP of the 2013 Liberty Bowl after leading the Bulldogs to a 44–7 win over the Rice Owls. His 2013 season performance ranks seventh in passing yards (1,940), tied for fifth in rushing touchdowns (13) and fourth in total yards (2,769) and total touchdowns (23). Following the season, he was named to the 2013 SEC Fall Academic Honor Roll.

In his first season as a full-time starter in 2014, Prescott led the Bulldogs to a 10–2 regular-season record, its first #1 ranking in program history, and led them to the Orange Bowl. During the 2014 season, Prescott broke 10 school records including single-season passing yards (3,449), total yards of total offense (4,435), passing touchdowns (27), and total touchdowns (41). Additionally, his 14 rushing touchdowns are tied for fourth in school history. Prescott also garnered several accolades throughout and following the season. He was named the Manning Award Player of the Week five times (vs. UAB, at LSU, vs. Texas A&M, vs. Auburn; vs. Vanderbilt), the 2014 SEC Offensive Player of the Week three times (at LSU; vs. Auburn; vs. Vanderbilt), the Athlon Sports, Davey O'Brien, Maxwell Award Player of the Week two times each (at LSU, vs. A&M), and was the 24/7 Sports National Offensive Player of Week (at LSU). He was named a 2014 Honorable Mention All-American by SI.com, was named to the 2014 First-Team All-SEC team by the AP, Coaches, and ESPN.com, and was on the 2014 SEC Fall Academic Honor Roll. He won the Conerly Trophy, was a finalist for the Maxwell Award, the Davey O'Brien Award, the Johnny Unitas Golden Arm Award, and the Manning Award. He also finished eighth in the 2014 Heisman Trophy voting and received two first-place votes. The Dallas Cowboys entered the 2016 NFL Draft with a plan to acquire a young quarterback to develop behind Tony Romo. After failing to trade up to select Paxton Lynch and Connor Cook, they selected Prescott in the fourth round (135th overall). He was signed to a 4-year deal. When Prescott joined the Dallas Cowboys for their rookie minicamp, he was issued #10 since veteran wide receiver Devin Street occupied his college number 15. During the first week of rookie minicamp, he decided to switch to #4 in honor of his mother, whose birthday is on September 4. He is the first Dallas Cowboys quarterback in history to wear #4.

The rookie moved up on the depth chart when backup quarterback Kellen Moore broke his right tibia during the first week of training camp and after the Cowboys could not reach an agreement with the Cleveland Browns to trade for backup Josh McCown.

After Moore's injury, Prescott competed with second-year quarterback Jameill Showers for the backup job to established starter Tony Romo. Several reports from August training camp indicated that Showers outperformed Prescott, showing greater accuracy and a quicker release. However, the Cowboys coaching staff made the decision to start Prescott in the team's preseason opener at the Los Angeles Rams. Working with the Cowboys' first-team offense, Prescott completed 10 of 12 passes for 139 yards and two touchdowns in one half of action, though Dallas would lose the game 28–24. Prescott continued his hot streak throughout the rest of the preseason, impressing all with his veteran-like pocket poise and decision making.

After starting quarterback Tony Romo suffered a vertebral compression fracture during the first quarter of the Cowboys' Week 3 preseason game against the Seattle Seahawks, and in light of Romo's projected 8–10 week recovery time, Prescott was named the Cowboys starter for the beginning of the 2016 season.

With the Cowboys finishing the season with a 13–3 record, the team clinched the NFC East title. In the Divisional Round, the Cowboys faced the Green Bay Packers. Prescott completed 24 of 38 for 302 yards, with a quarterback rating of 103.2, and three touchdowns and an interception. Despite his strong performance, the Cowboys lost 34–31, ending their season. After a spectacular rookie season, Prescott was selected to the Pro Bowl and named the NFL Offensive Rookie of the Year, receiving 28 of 50 votes, beating out running back and teammate Ezekiel Elliott by 7 votes. He was also ranked 14th by his peers on the NFL Top 100 Players of 2017. He was named to the PFWA All-Rookie Team, becoming the second Cowboys quarterback to receive this award, joining Troy Aikman in 1989. Prescott started his second professional season with 268 passing yards and a touchdown in the 19–3 victory over the New York Giants on Sunday Night Football. He followed that up with his first setback of the season with a 42–17 loss to the Denver Broncos, where he was 30-of-50 for 238 passing yards, two touchdowns, and two interceptions. In the next game against the Arizona Cardinals on Monday Night Football, he bounced back with 183 passing yards, two passing touchdowns, and his first rushing touchdown of the season in the primetime 28–17 win. In Week 4, against the Los Angeles Rams, he was 20-of-36 for 252 yards, three passing touchdowns, and one interception in the 35–30 defeat. In the next game against the Green Bay Packers, he posted similar results, going 25-of-36 for 251 passing yards, three touchdowns, one rushing touchdown, and one interception in the 35–31 loss. The Cowboys snapped their small losing streak in the next game against the San Francisco 49ers, posting a 40–10 victory. In the game, Prescott had his third consecutive game with three touchdown passes. Prescott and the Cowboys followed up the big win over San Francisco with two victories over the Washington Redskins and Kansas City Chiefs to put the team at a 5–3 record. 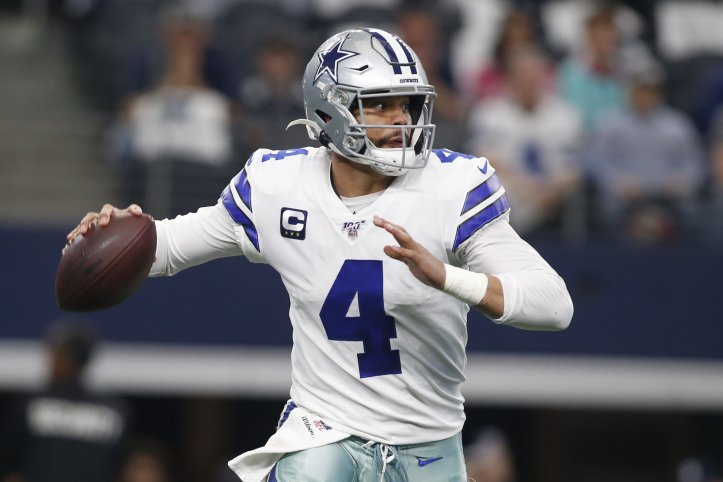 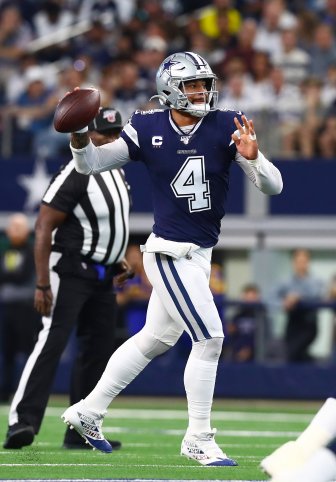 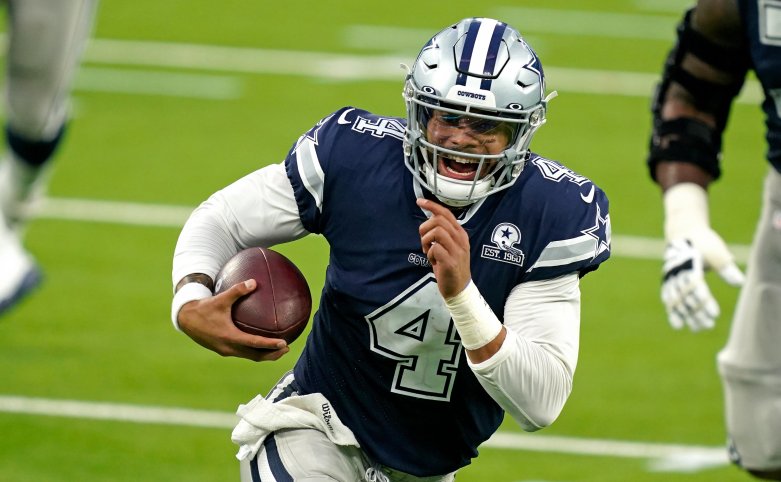 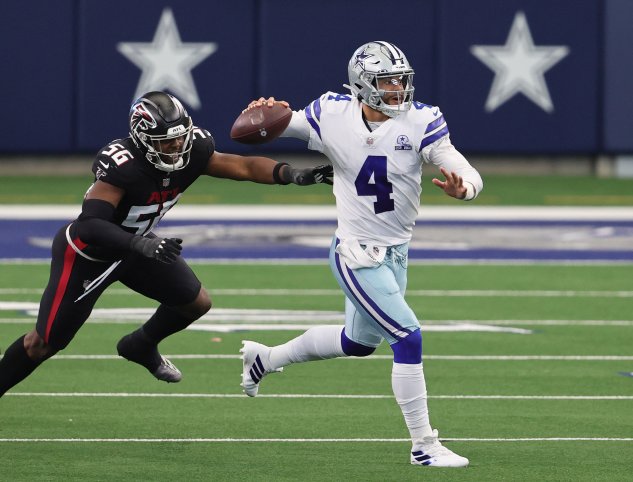 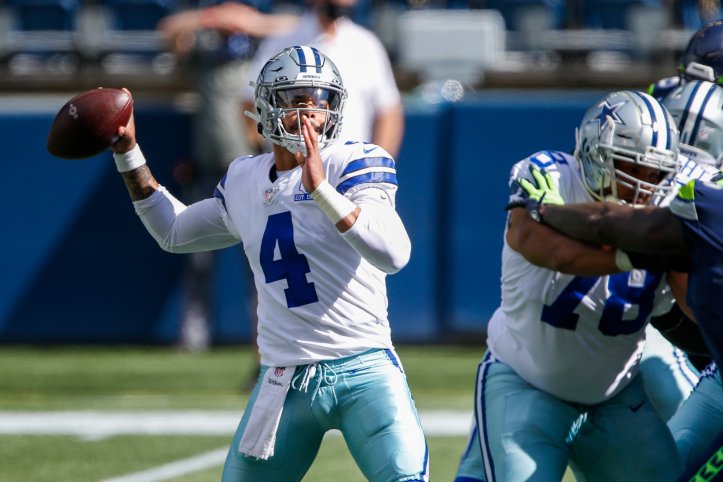